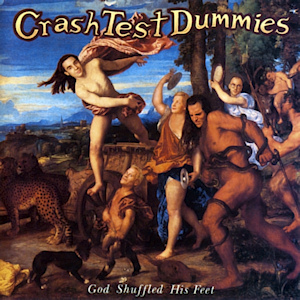 It’s been a slow news week and I’ve got to do something with my time other than just sit here staring blankly at my computer so I thought I’d put on some music. Like most people I’ve got wildly eclectic tastes when it comes to music and I’m also something of a philosopher, so you’ll understand why I’ve been a big fan of the Crash Test Dummies.

I fell in love with them over twenty years ago when I first heard their first wildly successful single ‘Mmm Mmm Mmm Mmm’ in 1993.

I remember the excitement of rushing out to buy their album on CD (yes kids… Cd’s) which I’ve still got, though thanks to the digital revolution I’ve saved it a lot of use by copying it into my computer and listening to it from the hard drive not the optical drive.

The Crash Test Dummies had success before 1993 with songs like ‘Superman’s Song’ which won them the 1991 Juno award  for Group of the Year.

For those that may not know, the Juno awards are a big deal in Canada which is where the Crash Test Dummies are from.

They offer an strange but oddly compelling mix of modern folk/alternative rock that I just can’t help but love, probably because it’s as far away from what I thought I’d like as Soft Cell is to a heavy metal fan.

More importantly it’s the quirky lyrics, that made me pause and think, because you see at the time I used to wonder the same type of things that Brad Roberts (the band’s lead singer) would sing about such as:

‘How does a duck know what direction south is? And how does he tell his wife from all of the other ducks?’

There’s some real philosophical gems in the lyrics such as:

‘Times when the day is like a play by Sartre,

When it seems a book-burning’s in perfect order’,

I think of all the insects that are sleeping

And wonder if the animals are dreaming’

‘When I kneel before your bounty

Sometimes I wonder if there could be really

UFO’s that come from other planets’

Anyhow, the day’s are often short when I’m working and seem to blitz by in the twinkling of an eye, nothing is more maddening than a day when I have nothing to do and no desire to do anything.

The day feels long then.

The sun is shining, it’s time for a cold drink and a bit of ‘me time’ so that’s what I thought I’d do today and put on the one album that I never get tired of listening to.  For me that the Crash Test Dummies – God Shuffled His Feet.

Previous post Why Globalisation must come to an end. 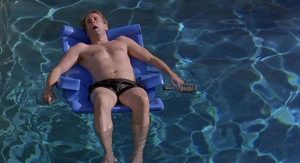